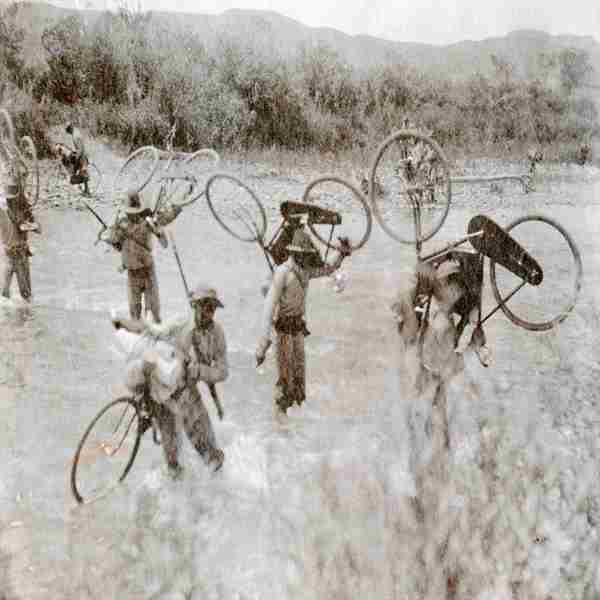 In the summer of 1897, 20 soldiers from the all-Black 25th Infantry Regiment Bicycle Corps set off from Fort Missoula, Montana on a grueling 1,900-mile bicycle ride to St. Louis. Called the "Great Experiment" by national newspapers, the trip was part of trial by the U.S. Army to to test the bicycle's military uses. Nicknamed the Iron Riders because of the heavy one-speed bicycles they pedaled and for their iron-hard constitutions, the soldiers endured conditions along the route that would have daunted even the most avid of modern-day cyclists -- freezing temperatures, extreme heat, food and water shortages, illness, and racism and hostility from local residents. In spite of these challenges, the Iron Riders successfully reached Forest Park, their final destination, on July 24, 1897, and were welcomed by a cheering crowd. This year marks the 125th anniversary of the 25th Infantry Regiment Bicycle Corps' incredible journey. To commemorate the anniversary, Missouri State Parks is partnering with Lincoln University of Missouri, the Greater Los Angeles Area Chapter of the 9th and 10th Horse Cavalry Association, and the Missouri Parks Association to host an event at the Missouri History Museum to tell the little-known story of these soldiers and their amazing feat. Activities include music by the Brass Ensemble of the 399th Army Band; historical demonstrations; exhibits of the route and riders; programs and presenters; food vendors; and welcoming Erick Cedeño, the "Bicycle Nomad," into Forest Park, the final destination of his 1,900-mile bicycle journey reenacting the 1897 ride.