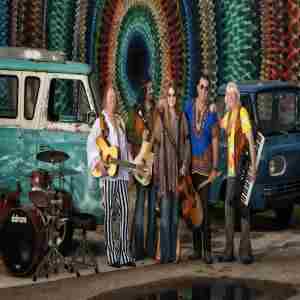 The year was 1969. Richard Nixon was president and man landed on the moon. The Vietnam War raged on as discord continued at home. Elvis Presley recorded his landmark comeback sessions while the Beatles gave their final public performance on a rooftop in London. And on a dairy farm southwest of Woodstock, New York crowds gathered for three days of peace and music.

1969 is a musical tribute to the great music that was recorded in that monumental year. Come join us and journey back as Peace of Woodstock performs songs by Fifth Dimension, Creedence Clearwater Revival, the Rolling Stones, the Jackson 5, Three Dog Night, Sly and the Family Stone, the Beatles, Motown, Norman Greenbaum, Youngbloods, Neil Diamond, Archies, Aretha Franklin, Dusty Springfield, Janis Joplin, David Bowie, Jackie DeShannon, and The Who.

1969 is more than a show...it is a multimedia event! By incorporating videos, slides, and facts about the year 1969, you will feel like you took a step back in time! In fact, we encourage you to break out your tie-dye, headbands, and peace signs for this concert!