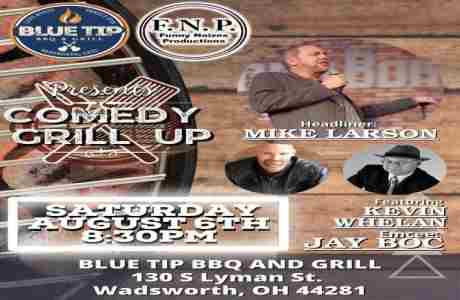 Funny Noizes Productions is pleased to announce our partnership with the Blue Tip BBQ, as we introduce an intimate evening of comedy " Comedy Grilled Up at Blue Tip BBQ " starring Mike Larsen, Jay Boc, and Kevin Whelan on Saturday, August 6th. ShowTime at 8:30 pm.
We encourage you to get your tickets early as there are a limited number of tickets available for this intimate evening of comedy in the Wadsworth's Newest Restaurant and event center. There are a limited number of tickets available and is certain to be a sell out. Be sure to bring your camera to get your picture with the comedians after the show.

Blue Tip BBQ is ocated in the center of Wadsworth, OH at 103 S. Lyman St. is a new family bar and grill that will be your new favorite destination for you night out with friends or family. Entertainment for all ages with live bands, e-sports and a classic ice cream parlor
HEADLINER, Mike Larsen has found success in three highly competitive fields - television, politics and stand-up comedy. He received Emmy and Writer's Guild Award nominations for his writing on HBO's Real Time with Bill Maher, has written speeches for many politicians, and made multiple appearances on The Tonight Show with Jay Leno.

While earning a Political Science degree from San Francisco State University, Mike ran for San Bruno City Council at 19, losing narrowly. After college, he moved to Washington, DC to further his political career. While there, Mike signed up for an open mike at a local comedy club and found a new calling. He returned to California and shortly later, was booked for the first of two appearances on the Tonight Show with Jay Leno.

After years touring the country as a stand up comic, Mike broke into television writing. In addition to his work on Real Time, Mike's credits include Two Guys and a Girl, Ellen, The Drew Carey Show, Grace Under Fire, Rodney, Reba, Sabrina the Teenage Witch and Whoopi. He's sold pilots to ABC, CBS, FOX, The Disney Channel and the BBC and served as Executive Producer and show runner of the acclaimed kids show Crash and Bernstein.

In 2008, Mike took a sabbatical from television to return to politics when he was recruited by newly-elected Congresswoman Jackie Speier to help set up her office. He served as Congresswoman Speier's Communications Director - managing her overall messaging strategy, writing speeches and op-eds, and working on health care legislation, financial reform and consumer protection. Mike's most rewarding experience, though, was working with survivors of military sexual assault to help them tell their stories in their own words.
In his free time, Mike mentors inmate writers at San Quentin State Prison and wrote the foreword to their 2016 Brothers in Pen Anthology. He now lives on a small ranch in rural Union County Ohio with his wife, actress Tina Gasbarra, and their daughter, Maryann.
FEATURE Jay Boc was born to Irish and German parents. That probably explains the drinking. He grew up during the 60's and 70's in Wilmington, Delaware riding StingRay bikes and listening to top 40 music while tormenting his 3 siblings. His goal was to become a black soul singer in a group like the Stylistics or the Chi-lites. Only two things stood in his way, he was (and still is) white and he couldn't sing.

Jay loved to make people laugh, so he started playing sports. Upon returning from a Phillies' baseball game he decided to emulate his new-found hero. He grabbed an empty Nehi soda case and walked around the neighborhood shouting "Beeer Heeere."
Upon graduating (read, asked to leave) a catholic high school Jay moved to California to begin what would come to be known as his "Decade of Decadence". Jay is now on the other side of the generation gap and is married to a Latina. He is now an old white man immersed in the Hispanic culture. The father of a son and daughter, Jay is the only one in his family that does not speak Spanish. This leads to bouts with paranoia, especially when they point and laugh.

After living in Delaware, California, Georgia, and Wisconsin (courtesy of the witness protection plan), he has settled down in Ohio. Prior to his mid-life crisis, he has worked as a plumber, bartender, repo-man, stuntman, banker, and appraiser. His clean style of humor comes from his observations of the world he has been exposed to. It is rare to find a comic that can draw from his experiences in both the blue collar and white collar work environments, day-to-day living in the Midwest and on both coasts, a family environment, and the unique perspective of a white man in a Latino world. Jay's humor transitions nicely from comedy clubs to colleges, to cruises to corporate shows.
EMCEE Kevin Whelan began his stand-up comedy career in Pittsburgh, PA in 1997. In the intervening 22 years, he has gone on to be a nationally touring comedian.