'Do Not Sleep' Easter Sunday Party at MK Arena 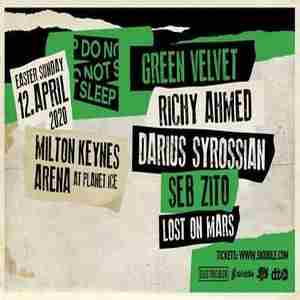 With an eagerly anticipated forthcoming party in Manchester this March,Ibiza brand 'Do Not Sleep' continue to spread the Balearic vibes across the UK, with a huge event set to take place at the MK Arena on Easter Sunday.
Kicking things off at 9pm on 12th April, the 'Do Not Sleep'Easter extravaganza will see a wealth of the finest names in the underground scene deliver 7-hours of house and techno to UK ravers, having cemented a firm reputation across the worldwide dance scene in recent years via vibrant gatherings across the globe, including Ibiza events in Space, Privilege, Sankeys, Pacha - and most recently Amnesia.
Led by legendary Chicago-born singer, songwriter, DJ, and producer,Green Velvet, Do Not Sleep's MK Arena line-up will also include highly anticipated sets from one of Britain's most esteemed house DJ/producers, Richy Ahmed, and multi-faceted DJ, producer, and radio host Darius Syrossian, who has established himself as a leading performer in the underground scene. With the all-star billing marking an appearance from astute selector Seb Zito, the Milton Keynes party's exceptional roster of underground excellence is rounded off by fast-rising talent Lost On Mars.
Providing a widely eclectic range of tones to dominate the dancefloor across the course of the 7-hour Easter party, the event - hosted by JBM Music( nominees in the category of 'Best Large Club Promoter' at the 18th anniversary of the Skiddle Awards)- is sure to prove a sell-out event with party people flocking to the MK Arena to catch the finest array of names from the world of house and techno.