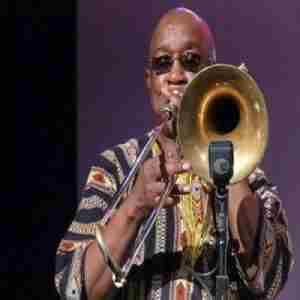 Dick Griffin is one of today's leading trombone players. Griffin has developed a highly personalized playing style, which he calls "circularphonics". His ability to combine playing chords on the trombone with circular breathing is unrivaled among Jazz trombonists. In a career spanning over 40 years, he has performed with some of the biggest names in Jazz and Soul, as well as appearing with several symphony orchestras. A short list of the luminaries Mr. Griffin has worked with includes: Duke Ellington, Count Basie, Ella Fitzgerald, Tito Puente, Art Blakey, Charles Mingus, Dizzy Gillespie, McCoy Tyner, James Brown, Harry Belafonte, Michael Jackson, Lionel Hampton, Cecil Taylor, Sun Ra, Sam Rivers, Rahsaan Roland Kirk, George Benson, Abdullah Ibrahim, Archie Shepp, Hilton Ruiz, James Carter, and David Murray. Griffin is also a painter, with showings in New York and Europe. These expressionistic images grace the covers of two of his CDs: Time Will Tell and Homage to Sun Ra.

Artist: Dick Griffin
Starting Price Per Person
$ 20.00 USD
Other Information
Login or Sign-up to View or Register for this event
Where
Greater Calvary Baptist Church

Add to Calendar
I May Attend, Remind Me
Event Organizer Contact
Welcome to Harlem
info@welcometoharlem.com
212-662-7779