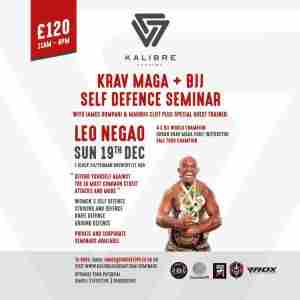 WHAT WILL WE LEARN?
You will learn the level one Urban Krav Maga syllabus and how to defend yourself against the 10 most common street attacks plus more special moves and techniques from Leo Negao.

WHO IS TAKING THE CLASS?
The class is hosted by James Rompani, a qualified Urban Krav Maga instructor under Leo Negao and Stuart McGill. Magnus Cliff will also be hosting short informative talks on the importance of sleep, nutrition and mindset when training. We will also be joined by Leo Negao, 4 times world BJJ champion.

I’VE NEVER DONE ANYTHING LIKE THIS BEFORE?
No worries, this seminar is aimed at beginner and intermediate levels, no prior experience is necessary, this will be an amazing chance to fast track your skills against the 10 most common street attacks and more with one of the leading instructors in the world: Leo Negao.

WHAT WOULD I NEED TO BRING?
The class will be held in a real life scenario location in the Truman Brewery, just off Brick Lane. You should bring a note-pad (to write some key tips and techniques down) a pen, a change of clothes, an old Tshirt or two to train in, some old trainers and some water to stay hydrated, also some snacks to keep your energy levels up (nutrition bar, energy drink, banana etc). We will do the rest.

I’D LIKE TO SEE MORE
No worries, here is a video recorded with our partners Street Smart Survival showing some of the moves and some of the techniques that you will be learning during the 5 hour seminar: https://www.facebook.com/StreetSmartSurvival/videos/493145561667941/


TELL ME MORE ABOUT YOUR SPECIAL GUEST LEO NEGAO
We are very honoured to have 4 x BJJ World Champion and co-chief Urban Krav Maga instructor Leo Negao for this seminar.
Leo’s unique way of teaching will ensure you grasp the full 360 degree approach to self defence using the skill sets of Urban Krav Maga, MMA, Vale Tudo and BJJ combined.
Leo has trained with a ‘Who’s Who’ of topfFighters from Carlson Gracie to Anderson Silva. Leo started to train at Gracie's academy together with Murillo Bustamante (former UFC middleweight champion), Amauri Bitteti, Mario Sperry, Vitor Belfort (former UFC light heavyweight champion) and others (all legends in the UFC/Cage Fighting realm). At this time Carlson Gracie himself was the coach for this future stable of famous martial arts fighters.
Leo quickly rose to become National and Estadual Brazilian Jiu-Jitsu (BJJ) champion in 1997 and after this move went on to become BJJ world champion in 1998, and also to win a further two national titles in 1998 and 1999! Leo then remained Estadual champion EVERY YEAR from 1997 to 2000!
Leo has even beaten Ricardo Arona: (8x Pride Champion) at the BJJ Championship in Brazil (2001) and has trained extensively with Anderson Silva in Brazil who is widely regarded as one of the best MMA fighter’s in the world.