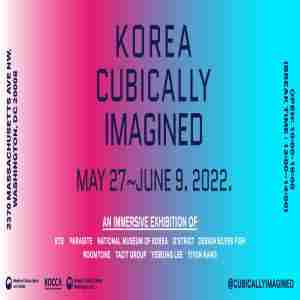 Korea in the 21st Century is defined by a convergence of culture, art, and technology. The country’s energetic creation of new cultural content is unmatched in the global sphere, with creative minds constantly at work at the intersection of past and future, tradition and cutting-edge technology, fine art, music, and more. To see evidence of this success, one need only look at BTS—a band that has surpassed the usual definition of the word to become an international phenomenon founded on diversity—or at Parasite, the first Korean film to win the Palme D’Or at the Cannes Film Festival as well top honors at the 92nd Academy Awards, including Best Picture and Best Director. These two examples have instilled a sense of confidence in Korean creative industries as a vibrant part of the global market.

Taking place at the Korean Cultural Center Washington, D.C. and organized by the Korea Creative Content Agency and the Ministry of Culture, Sports, and Tourism of the Republic of Korea, this edition of Korea: Cubically Imagined extends the recent success of the series which has been held in Paris, Hong Kong, Moscow, Beijing and New York. It includes 15 distinctive Korean Wave presentations highlighting the forefront of the nation’s creative talent.

The exhibition's various immersive environments connect digital technologies such as 3D, AI, and 5G with new spatial dimensions including AR, VR, and metaverse. By bringing together different genres and stories with the help of technology, each presentation aims to explore new dimensions of human creativity. Of particular note are the virtual spaces that serve as the backdrops to Dope and DNA—two performances from the online concert Map of the Soul ON:E by BTS, virtual spaces and sounds from Director Bong Joon-ho’s film Parasite, the National Museum of Korea’s digital Royal Procession with the People, FLOWER by digital media company d’strict, and Yiyun Kang’s projection mapping works Beyond the Scene and No Mother Nature.

Above all, Korea: Cubically Imagined generates new creative narratives by transcending outdated boundaries between East and West, tradition and innovation, music and film, art and architecture, and past and future, reminding us to consider the universal values of humanity based on Korea’s historical, cultural, and social heritage.