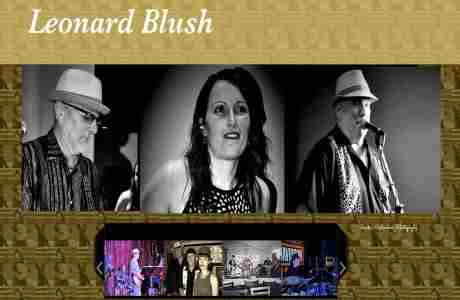 Dave Goodson (bass and vocals) has had a long and varied musical journey, so far. His grandfather (an Alabama barn dance musician in the '30s and '40s) bought Dave his first instrument (guitar) when Dave was 8. Dave started playing his grandfather's banjo when he would visit, so "PawPaw" bought Dave one of his own. Dave picked up the bass in the '70s as a sophomore in high school, while playing in the school jazz band, as well as playing in a local rock band. He continued on bass through college in school jazz bands, as well as various rock, country, and blues bands. Along the way, Dave also played tuba, euphonium, drums, and tympani in various musical ensembles over the years. For the past 15 years or so, Dave has played bass in several Atlanta area blues, R'n'B, and boogie outfits, and has found a very comfortable home in Leonard Blush!

Bryan McCauley (guitar and vocals) picked up his brother's guitar at the age of 11. By 13 he was in a local band playing at all the local functions in rural South Carolina. He moved with his family to Virginia where he met and played with many local musicians, again thanks to his brother. After moving back to S.C. in 1974, he re-grouped with former band mates to play country/bluegrass in the area. During the next couple of years Bryan worked in studios and was accepted to GIT (Guitar Institute of Technology) in California but was unable to attend. He moved to Atlanta in 1981 to attend MBI (Music Business Institute) and along with other students, formed a successful party band working the bar and college circuit until the late 80's. Bryan spent most of the 90's writing and working in the studio and began to form what is now Leonard Blush at the turn of the century.

Sandra Senn has been playing drums in the Atlanta area since 2006 and has been playing with the Leonard Blush trio since January of 2011. She loves playing all types of music, but especially high energy rock and blues. She is a hard-hitting, high energy performer with solid timing and a feel for the groove, but she also has the finesse and dynamics that are so important to performances. You can find Sandra at blues jams around town regularly where she sits in with talented local performers.

URL:
Facebook: https://go.evvnt.com/681446-0?pid=2874
Starting Price Per Person
Free
Other Information
Login or Sign-up to View or Register for this event
Where
Blind Willie's